Are You Building Bunkers or Bridges? 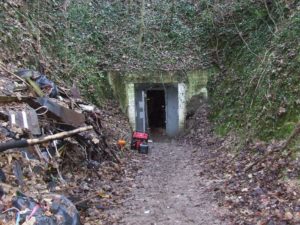 It’s easy to be critical

“You’re always on your phone.”

It’s a lot more difficult to be vulnerable.

Try transforming criticism into an expression of what you need. It takes courage, but you may be surprised by the results.
-from the Gottman Institute Marriage Minute email, 3-29-19

UNCLARIFIED NEED? This comment set me to thinking about my own marriage. Yes, critical statements roll off the tongue easier than responsible (and relationally mature) statements. Why so? We could talk about nature and nurture, like a “negative brain bias” and growing up with unrealistic demands, respectively. Also, criticism may be the expression of an unclarified need.

Take for example this statement: “We’re late again! You’re always making us late!” The “you” statement likely feels like an attack—one more salvo fired by a spouse onto the beach of relationship, leaving another pockmark. Critical statements launched over enough time may have as devastating a result on marriage as the huge guns of a battleship may devastate an enemy prior to a troop assault.

HEART-BUNKERS NEEDED! Think about this: What happens when a nation fears an attack on its borders? It fortifies its perimeter. A person will do the same. If my wife feels attacked by my criticism and comes to expect it, then she will fortify her borders, building defensive bunkers around her heart that are hard to penetrate.

Imagine a person’s heart “fortified” with dozens of reinforced bomb shelters or bunkers where she or he hunkers down during attacks. No wonder the bunkered heart cannot be reached. The spouse has taken shelter in one of the bunkers built for protection against attacks!

Of course, then the attacker spouse may criticize her/his spouse for being distant, or cold. Isn’t it likely that her distance and lack of engagement may be largely due to her hunkering in a bunker to withstand the next critical barrage?

TAKING A “YOU” TURN What if we take a “you-turn” instead? What if we turn away from you-statements by investing a bit more time in responsible self-understanding and in assertive (vs aggressive, or critical) statements?

What if I turn away from the indirect you-statements, like, “We’re late again!” and the direct you-statements, like, “You always make us late!” to statements that express the unclarified issue beneath my critical statements? Here’s what they may sound like after the “you turn”:
“Hey, dear, I really want (or need) to be on time for this meeting. Can you help me avoid the anxiety I feel when I’m late? I operate better at these events when I’m not anxious.”

BUNKERS OR BRIDGES? Being responsible takes more energy and effort than simply discharging negative energy at one’s closest targets. Yet, taking that time and effort to express one’s needs and desires in a responsible manner builds bridges, not bunkers, in relationships.

Of course, there’s no guarantee that my bride will meet my request; however, the chances of her doing so just went up greatly. Why? Because my statements were inviting her to help me, not assaulting her with my fear and anxiety. By asking for this help, I invite her out of the heart-bunker, built against my attacks in the first place.

TAKE A DEEP BREATH! Just take a deep breath and hold your tongue. That’s the place to begin. The best thing any of us can do amounts to simply holding our tongues when we feel criticism rushing for expression. Better to withhold for a few minutes the firing of that criticism bomb than to release it onto the heart of your beloved. Those few minutes give you time to consider what exactly you’re feeling and to express it most effectively. Since you care for your spouse, you want to nurture her heart, not damage it. Firing another devastating salvo of criticism will accomplish the opposite.

YOUR BELOVED’S HEART-GARDEN. Not easy to wait, is it? Good news, you’re not alone in the effort! Know that God wishes to help you because He cares for your spouse too.

Your spouse’s heart is God’s most precious soil. He’s attempting to create a beautiful garden there. To that end and if you seek help, God will grant you the ability to change from using words as weapons to using words as tools to nurture your beloved’s heart-garden.

SOBERING QUESTION: Will we inadvertently damage God’s garden in our beloved’s heart, or will we cooperate with God’s beautiful intention?

In a future article, we will explore relational bridge-building.